Pine Siskins and Salmonellosis – How to Identify and Prevent the Spread

UPDATE (4/23/21): As long as you aren’t seeing visibly sick birds at your feeder, it is safe to start putting out feeders again.

Backyards across the United States have had an unusually high number of small, heavily striped finches, known as Pine Siskins, making a recent appearance. This year’s irruption of Pine Siskins has been one of the largest in recorded history! An irruption typically occurs during periods of food shortage in a species’ home range, causing them to spread out southward in search of resources. Pine Siskins, whose range is typically limited to the boreal forests of Canada and the northernmost U.S. states, faced an extreme shortage of conifer seeds, resulting in their takeover of bird feeders in a yard near you! Learn more about the irruption.

Unfortunately, these birds are facing yet another threat across their irruption range. Salmonellosis outbreaks in Pine Siskins have been documented heavily in the Pacific Northwest, resulting in mass die-offs of this species and others that use feeders alongside them. This disease has now, unfortunately, made its way to Texas. 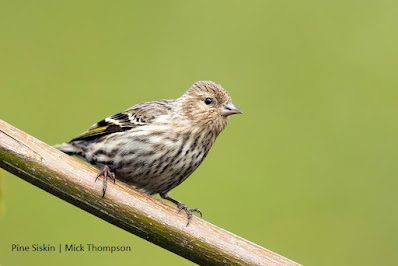 Salmonellosis is caused by the bacteria many people are very familiar with – Salmonella. This bacteria is primarily transmitted through populations of birds via fecal contamination of food and water by infected birds (though bird-to-bird contact can also result in transmission). Salmonellosis in birds can be tricky to identify, but is important to be on the lookout for as it can cause mortality in birds and spreads quickly.

Birds infected with Salmonellosis can show a number of different symptoms, from displaying swollen eyelids to acting lethargic and being slow to react. Other symptoms include sitting on the ground, appearing thin or fluffed up, and having pasted vents (feces caked under tail). Some birds, however, don’t show any outward symptoms. 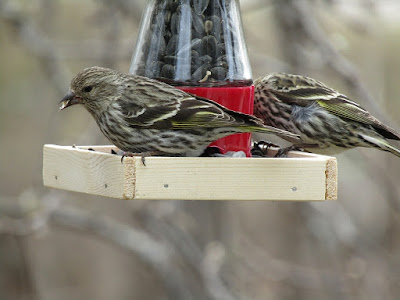 Infected birds can shed bacteria at feeders and water features, turning those areas into disease vectors. If you see any indication of Salmonellosis infection in your backyard birds, take down any bird feeders or water features immediately and leave them down for a few weeks or until the Pine Siskins are gone. Bleach anything a bird could have come into contact with, and pick up any discarded seed or chaff from your backyard. If you prefer to keep the feeders up, clean and disinfect feeders daily and ensure they are completely dry before adding food. These actions will help prevent further spread of Salmonellosis through contaminated feeders and by limiting bird-to-bird contact that occurs in areas where birds gather. Though Salmonellosis is appearing at high rates in Pine Siskins, this disease can spread to any other species that share feeders with these birds. We will be posting updates with guidance from Texas Parks and Wildlife Department. 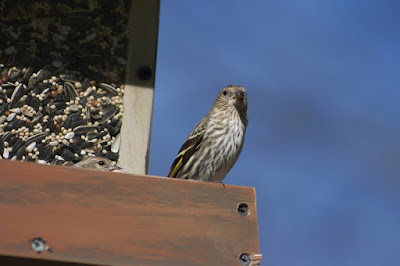 Feeder cleanliness isn’t just important during times of disease outbreak like this one, but year-round. Routine cleaning of your bird feeders and water features is important. Feeders should be thoroughly cleaned and disinfected at a minimum of 1-2 times per month, preferably weekly. To prevent overcrowding at your feeder, consider adding a few more, spread out around your backyard, including different types of feeders to encourage different species of visitors with varying feeding behaviors. 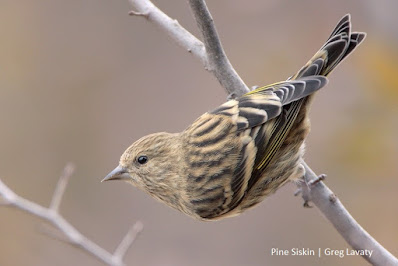 If you interact with birds that may be sick, be sure to thoroughly wash your hands with an anti-bacterial soap. If you have more questions about preventing Salmonellosis in your backyard, feel free to contact our Bird-Friendly Communities Program Manager, Anna Vallery, at avallery@houstonaudubon.org.

Summary of Actions to Prevent Salmonellosis:

We will update this post with further guidance from Texas Parks and Wildlife Department regarding the Salmonellosis outbreak.

Nicole Netherton Speaks to Environmental Commission about “No Amphitheater” Campaign